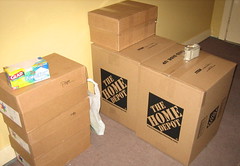 The basic premise behind the box model is this: Every single element on a web page, no matter how big or small, is a box. Got that? Anything that starts with a <tag> and ends with a </tag> is a box (container, whatever). So a <p> tag is a box, which is maybe inside of a <div> box, inside of a <body> box, inside of a <html> box. And with CSS, what you’re really doing is manipulating the size, shape, color, decoration and so forth of that box and its contents.

So what’s the box model? The box model is an agreed-upon (mostly… I’ll get to that in a bit) set of standards for how web browsers will display (model) the content (boxes) on a page. And what does that have to do with you? Well, if you want to style the content on your site, it’s a good idea to know how the rules you write will be displayed.

So here are the most basic properties you have to worry about when dealing with the box model: border, background, padding, width and margin. We’ll go through these properties one by one below. And to help it make sense, we’ll relate it to how you’d pack a box in real life.

And that’s really all there is to the box model! Well, at least it would be, except for one teensy-weensy little browser that does things a little bit differently. It’s called Internet Explorer. Perhaps you’ve heard of it.

Here’s how it differs: Instead of counting the width as the width of your content, Internet Explorer counts it as the width of everything related to your box. I’ll explain. Let’s say you set the following rules in your style sheet:

Look familiar? That’s our box from the example above. And as explained, browsers following the box model will give your content 400 pixels of wiggle room, surrounded by a total of 70 pixels of other stuff around it. But Internet Explorer behaves differently. Basically, instead of adding like we did, IE will subtract. So instead of ending up with a 400+40+10+20=470 pixel wide space, IE gives you a 400 pixel wide space with 400-40-10=350 pixels of space inside for your content, with 20 pixels of margin around it.

What’s the good news? Well, if you write your XHTML properly and include an appropriate DOCTYPE at the beginning of your page, everything from IE 6 and newer actually behaves like they should. So really, this is only a problem for IE 5.5 and below, assuming you’re using good DOCTYPEs. For more in-depth detail on IE and the Box Model, I’d suggest reading this fantastic article on 456 Berea Street.