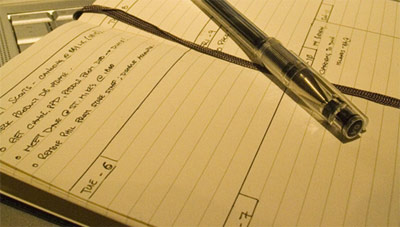 A couple of weeks ago, I wrote an article on creating a calendar using lists instead of tables. I was expecting a few people to find the concept interesting, and I was hoping for a little feedback from the web community. What I wasn’t expecting was the outpouring of comments and a very serious, fascinating debate on the semantic nature of calendars, the place of lists in web design, and more. And because I don’t think it’d be productive to just go through the list and respond to each comment individually, I thought I’d take some time and respond in a follow-up article. If you haven’t read the comments yet, I’d encourage you to do so first.

The first thing that I realized as the comments started to roll in was that my tutorial was fundamentally incomplete in a couple of vital ways. While I feel I did a decent job describing how to implement the technique, I fell short when it came to explaining how I envisioned the technique being used, or my reasoning behind what made using a list in lieu of a table such a useful idea. In other words, I’d covered the “how,” but not the “what” or the “why.” So I’ll cover more of that here.

I first came up with the idea for a list-based calendar at my 8-5 job as I was leafing through my appointments in Outlook. I thought about how useful it was to be able to switch between the month view, to the 7-day, to the 5-day, and so on as necessity dictated. I wasn’t restricted to just one view of my time: I had flexibility. And then I realized that even my day planner, an old fashioned, low tech paper product broke my time into months at the top of the page, but showed the days of my week in a more linear fashion.

And that got me thinking: was there any way to support that sort of flexibility in web-based calendars? I’d dealt with web calendars before: they were exclusively table-based and, as a result, fundamentally rigid. But what if, instead of turning to a table, I used a list? Then the data could be displayed linearly, like the 7-day calendar view of my planner, or in a grid like a traditional month-based calendar, as need dictated.

I was also thinking of my multiple-calendar setup in Outlook. I have two calendars: one for my meetings and appointments, which is generally useful in a month or week view, and one for my bills (I’m bad about remembering them!), which was really more useful as a list of dates. That convinced me even further that maybe a calendar didn’t need to be based on a grid.

I created my first test calendar with that flexibility in mind. I envisioned it being used in a scenario where it was sometimes useful to see things in relation to their days of the week or place in the month, and other scenarios where it was simply more useful to have things broken down by date. I figured it’d be an easy thing to set up bit of PHP or JavaScript to swap between two CSS files, changing the view on the fly. Of course, when it came to the tutorial, I focused exclusively on how to implement the idea, and neglected to mention why such an idea might be useful.

And that explains my thinking on the “what” and “why” portions of the tutorial. I was looking for a flexible calendar solution, one that wasn’t locked to the month-based grid.

Because — to get more into the semantics side of things — I would disagree with those that commented that a calendar was, fundamentally and semantically, a grid-based (and therefore table-based) entity. If calendars are married to the grid, why does my Outlook calendar have so many alternative views? Why does my day planner make so much sense to me at a glance, even though the days are arranged in a single column? Thinking of a calendar as exclusively month-based and grid-based is a narrow way at looking at the concept, considering all the alternative options we as a culture use on a daily basis.

And all that plays into the semantics of the calendar. Is a calendar, semantically, a grid? Sure, if you’re talking specifically of a month-based calendar. But I’d argue that my day planner is much more closely semantically related to an ordered list, and my Outlook calendar is like both, depending on what view I’m using at any given moment.

I can understand now why my calendar tutorial stirred up such a big semantics debate: my tutorial showed a calendar locked in a month-based, grid-like format. I didn’t mention any of my ideas on flexibility, multiple views, or the rest. And that resulted in well-reasoned retorts in the comments and even elsewhere: for example, Unintentionally Blank argued that I had presented a grid, but used a linear tool to do so, and thus wasn’t using the right tool for the job. Similarly, commenter Mark Aplet directed me to a recent post on his blog visual28, where he argued that designers were using lists for everything; that, essentially, lists were becoming what tables had once been in the web design world.

And the ironic part of it all is, I agree with both of those stances. Yes, I worry that designers overuse lists: I am opposed to the idea, for example, of using an unordered list as a basic structure for an entire website. And I would also agree that, if you’re presenting tabular data, there’s no better tool than a table to accomplish that aim. Which meant that my earlier attempts to respond to the debate raging in the comments all started with, “Yes, but…” Which is how this, longer and hopefully more clearly argued article came about.

So, what say you, semantically impassioned readers? If the goal is to create multiple calendar views with a single XHTML file, is a list an acceptable tool or am I still trying too hard to live off the grid? Does a calendar by any other orientation smell just as sweet? Let’s keep the debate alive: we’ll all end up coming away a little bit wiser.